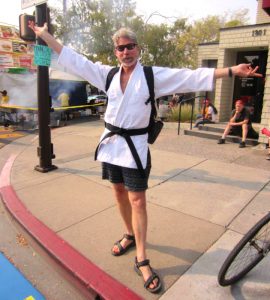 How did you get started with aikido?

I had probably the hippie-est introduction to aikido, finding out about it in The Last Whole Earth Catalog, which I read cover-to-cover, over and over, sometime around 1972 or ’73.  (I recently found a digital copy online, and the original page is below).  That little blurb, a review of Aikido and the Dynamic Sphere, with a couple of the simple, beautiful drawings from the book, made a huge impression on teenage me, at a time when huge impressions were exactly what I was looking for.  The 60’s were over, according to the calendar, but violent confrontations, and—especially—the Vietnam War, were not.  To someone who was lucky enough never to be in a fight, aikido seemed like an amazing way to come to grips with violence, without being violent yourself.  Since I saw becoming a conscientious objector or starting a new life in Canada as my two upcoming options, anything that offered structure to a nonviolent way of life was very appealing.  (By the way, I did eventually buy a copy of the book, and managed not to lose it for several years, so that review really worked.) 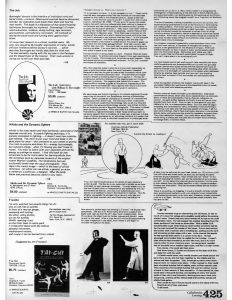 Fast-forwarding now:  The war ended before I had to make any dramatic life decisions, but nonviolence and aikido always stayed in the back of my mind.  I was finally able to have time, money, and access to dojos when I finished college and moved to Berkeley in 1980.  In fairly short order, I joined the Aikido Institute, and trained with them and with Nadeau Sensei at Aikido of San Francisco.  The training was sporadic, due to job demands, but even from the very first class, I was hooked on the art, if not on the dojos.  It was probably a mixture of raw beginnership and clumsiness, plus feeling a little intimidated by the ranking students, but I never felt fully comfortable in those dojos.  While I felt occasional flickers that I was “getting it”, it always seemed that something was missing.  I was just starting to train for 6th kyu when I ended up seriously damaging a knee in a forward roll one day in 1984, and that (plus marriage, kids, and the job) put a halt to my training for about 23 years.  More about forward rolls in a bit…

How did you get started at the Aiki Arts Center dojo?

Fast-forward now to 2007.  My wife, Jo, sees a flyer in the Berkeley Downtown YMCA, advertising an aikido class.  To my surprise, she encourages me to check it out, even though I’m now 50 years old and have a back injury to add to my knee issues.  “Pshaw,” I think, “how could there be real aikido taught at the Y?”  And that’s when I first met Nick Sensei, Azzia Sensei, and the other students who would change my experience of aikido dramatically.  From the get-go, Nick Sensei had the ability to break down both the physical and philosophical complexities of aikido and make them accessible to me.  It took awhile, but I started to feel more comfortable, and like I had a chance to really get this aikido thing after all.  On a physical level, things like having Nick Sensei explain in great detail how to do a forward roll that won’t break a knee or tweak a back made a huge difference. I could never relax and enjoy ukemi in my early days on the mat, and now it’s something I look forward to, even in mid-air.  And on a deeper level, at the Aiki Arts Center, for the first time, I felt I was given permission to succeed, and that was the thing that was missing for me in the other dojos.

What are you working on these days? What themes spiral through your practice?

I think that not much has changed from when I read that page in the Whole Earth Catalog.  The world is still a place full of confrontation and violence and war, I’ve still never been in a fight (and I plan on keeping it that way), and I’m still trying to figure out what a path that is nonviolent and courageous and useful looks like.  The training at the Aiki Arts Center, both open hand and weapons, really helps, because, as either uke or nage, I’m learning to “keep it real”, by giving an honest attack or an honest response, and staying connected all the way through the technique or ukemi.  Honesty and connectedness, in a world where it’s so easy to waver and bail out, are good skills to practice.

I could go on and on about lots of other stuff, like how important it is to me to make new folks feel welcome on the mat (which is a distinctly Aiki Arts Center trait—not necessarily to be found in all dojos), or how much I learn from watching my fellow yudansha teach, and how much I steal from them when I lead a class.  But I think the main thing for me (and probably for all of us) is just working towards being present—being fully alive in the moment.  The work we do on the mat is to give ourselves hundreds of opportunities per class to wake up, to be fully present when we meet our partner, and feel the joy that results.  That’s gotta spill over into life in the highly-overrated “real world,” right?